Pythagorean square or Psychomatrix, describes the psychological portrait of a person, through their innate qualities, expressed in figures within a square of nine cells.

The Pythagorean square or Psychomatrix, comes from the Pythagorean system of numerology, which studies the world using numbers. It is believed that everything is permeated with vibrations that can be explained through symbols. This is done by writing for each number specific vibration properties. And then they use the knowledge gained in this way to shed light on many aspects of human life.

Magic squares, are matrices of numbers that carry special information about the world and about people, used by Chaldean magicians and Egyptian priests. The potential of the squares were not only exhaustively describing the characteristics of the personality of any person, but could also attract various energies into life, which means - wealth, love and stuff; being also used as talismans.

Pythagoras added a mathematical component to harmonize the basic of Egyptian's matrix, expanding and deepening it onto a system; where he managed to complement each digit meanings with the square's own target lines.

The followers of Pythagoras modernized this matrix, creating a completely new teaching called the Pythagorean square or Psychomatrix, which is able not only to reveal the character of people, but also to help in the search for the meaning of life.

How does the Pythagorean square work?

The numbers that are used in the psychomatrix fall on a scale from 1 to 9, where zero is not used. Several calculations are done to the date of birth of a person taken as a basis, and the final figures fit into the square.

The magic square has three rows and three columns. Each cell of the table is filled with a calculated set of numbers. Each set has its own meaning, defining leadership, energy, character and compatibility.

Since any number is responsible for a certain quality in a person's life, the presence and strength of such a quality is determined by their location and quantity.

Psychomatrix affects all spheres of life, as well as personal characteristics of people, providing a guidance to learn about the past, present and the future; having a person's date of birth, you can make a square and discover everything related to: character, personal luck, inclinations, health, memory and thinking, as well as its energy and logic.

How to calculate the psychomatrix of Pythagoras?

To calculate, you will need to know the person's date of birth and have a sheet of paper with a pen on hand. It is important to remember that zeros after the numbers do not matter, they do not need to be written out.

By counting the number of digits in both rows, you can find how many times a person has come to this world. Pythagoras believed that the maximum number of births is fifteen, and after that people leave for other worlds. In this example, the number is thirteen.

Begin to fill the cells of the square. Draw a square with three columns and three lines. You need to write units from both resulting rows. In the first - all ones, in the second - all deuces, in the third - threes, and so on up to nines. Place the word "—" if the number of digitls is null. In this example, these were no fours, sixes and nines.

In order to correctly interpret the results, you need to know what the columns, rows, cells and the numbers within them mean.

The meaning of the numbers:

The interpretation of our example:

A person born on 20 May 1971 came into the world for the 13th time. By nature, he is quite strong-willed, tough, very energetic, next to him other people feel the rise and surge of strength. He is incapable of science, although by nature he is punctual and accurate.

This person's health has big problems, he is sick a lot in life, and most likely has some kind of chronic ailments. He has a wonderful, strong intuition, his premonitions can be trusted - they often come true.

This person will have to work a lot physically, it is very difficult for him with the intellectual sphere of work. Although creativity, albeit small, are available.

This person lives by his own rules, does not like to take responsibility at all, does not take into account the norms of morality accepted in society. Intellectually, he is poorly developed, and he cannot reach great heights here.

The self-assessment lines are the norm, defining itself as it is, does not overestimate or underestimate this indicator. It is difficult in terms of finance, money is hard for him, although intuition greatly helps to earn and spend it correctly. And in terms of talents, we can say that a person's giftedness is rather low.

The Interpretation of the Psychomatrix

Each number is responsible for a specific area in the character and personality of a person. And the number of digits characterizes the severity of this or that quality.

The absence of twos or one deuce means the lack of a reserve of your bioenergy. This means that the channel is open for an intense collection of alien or cosmic energy. This is the so-called. "Energy vampires". Note: one of the signs is that you love old things and are highly communicative. Lively in communication, you try to feed on energy from others. Your strength is enough, but try to pay more attention to gymnastics.

There is another way to determine the state of your bioenergy. Refer to the Second Working Number. If it is small - from 1 to 4, then you are an "energetic vampire" who lives by recharging from others. If from 5 to 9, then you are the so-called "energy donor", 10 - "white magician", 11 - "black", if the number is more than 11, then add up its constituent numbers and operate with the resulting number. Consider this discovery of the ancients: at 2222 you are of great interest to the opposite sex. But if three sixes are added (666), beware of temptations.

Third Cell: A penchant for science

The absence of triplets is a very neat or punctual person. Stands out among others with his conversation.

Lack of fours - this person is prone to serious illness (especially when calculating 2).

No fives is an undiscovered channel at birth. These people are always trying to do something, to do something, always in thought, in experiment, in calculations. Life experience shows that many mistakes will be made by this person. It's hard for these people to live. Everything that is given is pierced by the head.

There are no sixes - a person came to this world to get a profession, physical labor is necessary, but he does not love him.

There are no sevens - this person was born to earn sevens in his subsequent transformations. But you can only earn them by compassion. A very hard life. It is not easy to develop.

A person who does not have eights should not be relied on if he is something take something in no hurry to give.

Ninth Cell: The potential of intelligence

There are no nines. Weak level of mental ability.

When interpreting the Pythagorean square, the combination of numbers in different cells is of great importance, and everyone should harmoniously combine the inherented quality in the nature, through the path of spiritual develppment, blessings to the world and mastering of certain skill. 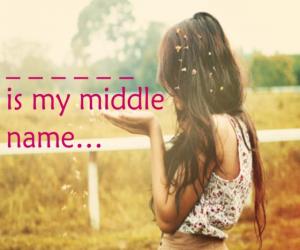 What should your Middle Name be?