9 Star Ki is a popular system of astrology, often used alongside Feng shui. It is an adjustment or consolidation, made in 1924 by Shinjiro Sonoda, to traditional Chinese divination and geomancy methods, such as Flying Star Feng Shui, the Ming Gua number from the Eight Mansions Compass School of Feng Shui, and combining the Lo Shu Square with the Later Heaven, Bagua.

Origin of astrology Nine Star Ki is unknown. Evidences exist, that people were using it already 8500 years before our counting. There have even been many indications that Nine Star Ki Astrology existed in Tibet and in India. Of course, name of it is different as names were changed in history. In modern times Nine Star Ki was used in China, then simplified in Japan and renamed to Kyu Sei Kigaku. As late as in 1970 it was ported to western world and now is used all over the world. On west we are used to call it Nine Star Ki.

In China, human beings were said to be closely related to the atmosphere, for they live and spend their whole life in the atmosphere. 9 Star Ki astrology tells your characteristics and compatibility with others by classifying the atmosphere into nine and determining your atmosphere at birth. It is said that your fortune depends on the atmosphere in which you live your life regardless of your efforts.

There are thought to be nine-year and nine-month cycles of Ki/Qi on Earth, which are related to solar and seasonal cycles, and which have common effects across the planet on people's mental and physical development and experiences throughout their lives. The 9 Star Ki stars are numbers that represent those cycles. The numbers can be calculated for anyone on/from Earth using only a birthday. The system most commonly uses two numbers.

First, the Honmei star 本命星, true feelings star, like Honmei choco, is the principal, adulthood, or year number, describing one's most mature mind/heart, karma, or spirit type. Your Primary number represents the energy that you have by nature, that is, yourself; reflects your constitutional or basic character and personality. This number is for general use in determining the primary character, overall life direction, and constitution of a person.

Your primary number can be determined by using the following steps.

The Nine Star Ki year begins around February 4th or 5th, the point between the Winter Solstice and the Spring Equinox. People born before this date have a Primary Number of the year before.

Second, the Getsumei star 月命星, month life star, is the character, childhood, or month number, describing one's physical connection to the Earth, namely one's more primitive or physical features. Your secondary number representing your inborn energy, that is, your behaviour.

Your secondary number can be determined by using the following table.

A third, energetic number is given by some sources and calculators, especially in the Western world, and is said to describe one's outward behaviour, personality, or the first impression one usually makes on others. Being derived from the principal and character numbers, the energetic number may not provide new information. It is not a day-specific number, which one can determine by other means. The energetic number also differs from the Ming Gua number used by the Chinese Eight Mansions Compass School of Feng Shui.

The numbers are each associated with one of the Chinese Five Elements, following the Later Heaven, Bagua pattern. Each number/star is considered a variation on the characteristics of that Element group. For example, 3 is the blue-green Wood star, whereas 4 is the dark-green Wood star. Combining the Lo Shu Square with the Later Heaven Bagua, blue-green is meant to indicate being more excited, aroused, and early Spring-like, whereas dark-green means being more gentle, flexible, and later Spring-like.

The Taoist theory of the five elements, Wood, Fire, Earth, Metal and Water is a way to define Chi (energy).

The elements, like Yin and Yang, have a cyclical harmony and balance which permeates through all things. Understanding our own elements through, 9 star ki, can help us create balance and health in our lives.

When we are in balance we work the qualities of our elements towards the greater good. When we are out of balance we can become angry, anxious, nervous, fearful or stuck. With the understanding of the elements and how they work together we can make simple shifts that will bring things back to a balanced, productive state. 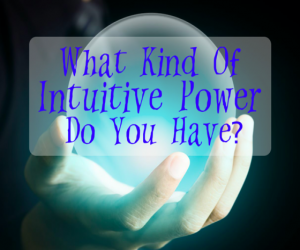 What kind of Intuitive Power do you have?