Xuan Kong Flying Star feng shui or Xuan Kong Fei Xing is one of disciplines in Feng Shui, and is an integration of the principles of Yin Yang, the interactions between the five elements, the eight trigrams, the Lo Shu numbers, and the 24 Mountains, by using time, space and objects to create an astrological chart to analyze positive auras and negative auras of a building.

These include analyzing wealth, mental and physiological states, success, relationships with external parties, and health of the inhabitant.

During the Qing Dynasty, it was popularized by a grandmaster Shen Zhu Ren, with the book that he wrote called Mr. Shen's Study of Xuan Kong, or Shen Shi Xuan Kong Xue.

Flying Star Feng Shui does not limit itself to buildings for the living or Yang Zhai, where rules pertaining to directions equally apply to all built structures; it also applies to grave sites and buildings for spirits or Yin Zhai.

Modern representation of the Lo Shu square as a magic square. In the Lo Shu Square, flying stars are nine numbers.

Each number in the Lo Shu represents one of the Chinese Trigrams and is related to an Element, Family Member, Cardinal, Colour, Hour, Season, Organ, Ailments and many others.

Once you know the meanings of the lucky and unlucky numbers, you will find the charts easy to understand. Study the numbers of the water and mountain stars in the chart that applies to your house or apartment. Then you can determine which room in your house has wealth luck and which has afflictions. You can energize or suppress accordingly using the symbols and cures recommended.

The auspicious numbers in any Flying Star chart are the numbers one, six, and eight. The number eight will be the most auspicious number until 2024. It is also a number that is at the peak of its strength and vigor. Those with Kua Number Eight will experience extreme good fortune until 2024. Telephone and license plate numbers ending with the number eight will also bring good fortune.

The number six represents heaven and also the patriarch. When the Water or Mountain Star is six, activating it with suitable symbols or features will bring you luck from heaven. The number one is also a particularly lucky number and it means that you are bound to be victorious.

Two other good numbers are the number four, which represents love and romance, as well as good fortune in research and scholarship, and the number nine. The number four is also excellent for those who work in the communication business, such as writers and teachers.

The square is the basis of all compass formula feng shui interpretations of Chi energy. The Lo Shu reveals the movement and changes of Chi energy over time and features prominently in advanced formulas and methods of feng shui.

The bad luck numbers in any Flying Star chart are two, three, five, and seven. The number two brings illness and this must always be overcome with 6-rod wind chimes made of all metal. The rods should be hollow and have a coin with the Pa Kua symbol at the back. When the number two flies into your bedroom as the Mountain Star, it is the surest sign of illness. If it flies in as the Water Star, you are in for a worrisome time financially, with enough worries to make you sick.

The number five is also known as the five yellow and this number is to be feared as it causes accidents, loss and all kinds of severe mishaps. When the Mountain Star is five, it brings financial loss. The number five is at its most dangerous when the annual and monthly five are in the same grid, or when a nine has flown in to magnify its ill effects.

When you see the five in any sector you must immediately install the cure, which is the five-element pagoda. This is an all-metal hollow pagoda. Unscrew the pagoda and fill it with earth taken from your garden, then screw the pagoda back into place. This symbolically locks up the deadly Five Yellow.

The number three is known as the quarrelsome star that brings hostility and danger of misunderstandings and can lead to litigation. It causes obstacles to all your plans and at its most severe can be dangerous as well. It is the number that causes violence and anger to boil over. When you see the number three fly into your room as the Mountain Star, it will cause you to fight with people over money matters. To control the number three star, you need something belonging to the fire element, hence something red will be ideal, such as red curtains or red carpets.

The number seven is a violent star that causes burglary and creates the Chi that leads to muggings or robbery. The number seven star can be overcome with water, but since you cannot place water inside the bedroom, another cure is an image of the rhinoceros.

The numbers to fear are five and two because these two numbers are the sickness numbers. Wherever they appear in any chart, if you stay or sleep in those sectors, you will suffer ill luck, get sick, or suffer misfortune. 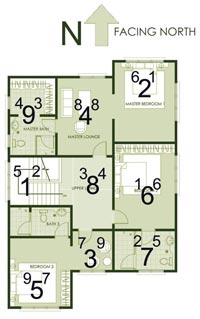 The number three is a hostile number and it brings misunderstandings, quarrels and fighting. If the three hits your room you could be faced with legal action.

The number four is lucky for romance and brought literary luck in Period Seven, but it is unlucky in Period Eight. It must not be too near water as this can lead to sex scandals.

The number nine has the power to magnify the ill effects of five and two. It is to be feared when it occurs with these two numbers. But on its own it is a good number encompassing the completeness of heaven and earth.

The number one, six and eight are the most auspicious numbers, but it is the number eight that is truly awesome. The energy of six is weak and needs to be activated.

While a normal compass is sufficient in determining the direction of a house facing as long as it is accurate, feng shui masters would use the Luo Pan whenever possible. Luo Pan enables a geomancer to quickly identify which of the 24 mountains the property is facing and sitting on. 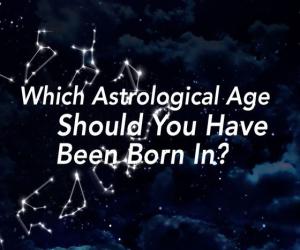 Which Astrological Age should you have been born In?