A fortune cookie is a crisp cookie usually made from flour, sugar, vanilla, and sesame seed oil with a piece of paper, a "fortune", on which is words of wisdom, an aphorism, or a vague prophecy. The message inside may also include a Chinese phrase with translation or a list of lucky numbers used by some as lottery numbers, some of which have become actual winning numbers.

Fortune cookies are often served as a dessert in Chinese restaurants in the United States and some other countries, but are absent in China. The exact origin of fortune cookies is unclear, though various immigrant groups in California claim to have popularized them in the early 20th century, basing their recipe on a traditional Japanese cracker. Fortune cookies have been summarized as being "introduced by the Japanese, popularized by the Chinese, but ultimately ... consumed by Americans."

As far back as the 19th century, a cookie very similar in appearance to the modern fortune cookie was made in Kyoto, Japan, and there is a Japanese temple tradition of random fortunes, called o-mikuji. The Japanese version of the cookie differs in several ways: they are a little bit larger; are made of darker dough; and their batter contains sesame and miso rather than vanilla and butter. They contain a fortune; however, the small slip of paper was wedged into the bend of the cookie rather than placed inside the hollow portion. This kind of cookie is called tsujiura senbei (辻占煎餅?) and are still sold in some regions of Japan, especially in Kanazawa, Ishikawa as the lucky items to start Happy New Year. Some said that it's sold in the neighbourhood of Fushimi Inari-taisha shrine in Kyoto. 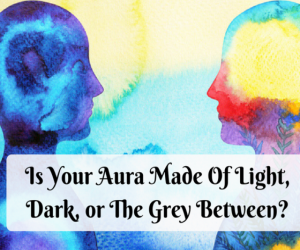 Is your Aura made of Light, Dark, or the Grey between?