The Chinese lunar calendar is the longest chronological record in history, dating from 2637 B.C. when the first cycle of the zodiac was introduced. One complete cycle takes 60 years and is made up of five simple cycles of 12 years each. The 78th cycle started on February 1984, and will end on February 2044. Twelve animals were assigned to each of the 12 years when, according to legend, the Lord Buddha summoned all the animals to come to him before he departed from Earth. Only twelve animals came to bid him farewell. As a reward he named a year after each one in the order that it arrived. First came the Rat, then the Ox, the Tiger, Rabbit, Dragon, Snake, Horse, Sheep, Monkey, Rooster, Dog and Boar. Thus, we have the twelve animal signs of today. The animal ruling the year in which you were born exercises a profound influence on your life. "This is the animal that hides in your heart".

The lunar year is divided into twelve months of 29 1/2 days. Every two and a half years, an intercalary month is added to adjust the calendar. The addition of this month every third year produces the Lunar Leap Year. For easy reference, the beginning of each lunar month is the date of the New Moon marked on the Western calendar.

During the complete 60-year cycle each of the animal signs (sometimes also referred to as the twelve Earth branches) is combined with the five main elements: Wood, Fire, Earth, Metal and Water. The element of your lunar sign will exercise their influence on your life.

The entire universe is composed of these five elements. They are interdependent and each is controlled by another. Hence we find that:

The Moon, being the closest heavenly body to Earth, has shown its many visible powers to mankind since the dawn of civilization. Its magnetic pull has ruled the rising and ebbing ocean tides as well as all other bodies of water. The Chinese culture has built itself firmly around the lunar influence, believing it to affect humans so immensely because our bodies consists of three-quarters liquid. Likewise, plants and animals are subject to its all-encompassing force.

Would it be too farfetched, therefore, to speculate that even nations will be beneficially or adversely affected, depending on whether they were born under a good or a bad moon? Will the year in which a country is formed have a great bearing on its place in history? Chinese fortune-telling leaves us to draw our own conclusions, after providing us with the necessary tools.

It is said that astrology is an accurate science, based on fixed formulas and mathematical calculations. Likewise, lunar horoscopes are equally exacting and scientifically evolved. Yet I hasten to add that it can be considered as an art form: the art of recognizing relevant facts in whatever disguises they may appear or expressed in. The Chinese sages of old and the fortune-tellers of today liken themselves to medical diagnosticians of the present, probing, searching and forever interpreting telltale signs of what the future may hold.

The ancient Chinese method of chance reading is never dogmatic or fatalistic. We are never made to feel hemmed in by our weaknesses nor inhibited by our deficiencies. Rather, we are encouraged to exploit our resources in varied and imaginative ways.

Thus, Chinese horoscopes, instead of restricting us, teach us how to plot new courses if our present methods of approach do not meet with success, and how to circumvent the circumstances of birth and other barriers and to reach our goals by taking new routes. As they instruct us in self-analysis and in knowing what to expect from situations, we will be able at worst to face, at best to solve, the problems we are most fated to encounter. 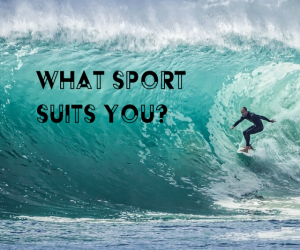 What sport is actually for me?