The I Ching (Chinese: 易經; Old Chinese: *lek k-lˤeŋ; pinyin: Yìjīng; [î tɕjə́ŋ]), also known as the Classic of Changes or Book of Changes in English, is an ancient divination text and the oldest of the Chinese classics. Possessing a history of more than two and a half millennia of commentary and interpretation, the I Ching is an influential text read throughout the world, providing inspiration to the worlds of religion, psychoanalysis, business, literature, and art.

Originally a divination manual in the Western Zhou period (1000–750 BC), over the course of the Warring States period and early imperial period (500–200 BC) it was transformed into a cosmological text with a series of philosophical commentaries known as the "Ten Wings." After becoming part of the Five Classics in the 2nd century BC, the I Ching was the subject of scholarly commentary and the basis for divination practice for centuries across the Far East, and eventually took on an influential role in Western understanding of Eastern thought.

The I Ching uses a type of divination called cleromancy, which produces apparently random numbers. Four numbers, 6 through 9, are turned into a hexagram, which can then be looked up in the I Ching book, arranged in an order known as the King Wen sequence. The interpretation of the readings found in the I Ching is a matter of centuries of debate, and many commentators have used the book symbolically, often to provide guidance for moral decision making as informed by Taoism and Confucianism. The hexagrams themselves have often acquired cosmological significance and paralleled with many other traditional names for the processes of change such as yin and yang and Wu Xing.

I Ching (Yijing) oracle is based on the 64 principles from the Book of Changes with interpretations inspired by the elements of nature. By clicking on the virtual coins 6 times a primary hexagram will be built from the bottom up.

There are four types of lines that can be generated by throwing the coins: Yang (solid) Yin (broken) old Yang (changing) and old Yin (changing.) Any changing or old lines will create a secondary hexagram which reveals both the basis of your question and the changes that are at play. Consider both hexagrams and any changing lines as an answer to your question.

No Changing Lines: If you receive a hexagram with no changing lines, read the interpretation for the Unchanging hexagram. Unchanging hexagrams are observed to be in a static condition and require careful examination in order to understand why the situation might be at an impasse or unchanging .

The secondary or relating hexagram can show both the foundation of your question and the potential outcome. In many cases, the transformed hexagram will show the lingering atmosphere or longer influence at play while the first hexagram is revealing your current mindset. For example, (64) Before Completion, line 3 changing to become (50) Cauldron would suggest that a situation requiring patience to 'simmer in the pot' (50) to define itself more completely is meeting your current mindset that it should be reaching completion already. So line 3 of hexagram (64) warns you about moving too hastily on past assumptions and the need for patience to examine other possible outcomes.

The lines will offer advice about how to transcend any misunderstandings about the principles at work in both hexagrams. This is important because many people use the wrong approach in assuming the first hexagram always changes to become the second. Change is not linear ~ it is usually circular. In this way the primary and secondary hexagrams are interacting and influencing each other ~ one is not always destined to become the other. The hidden influence or Nuclear Hexagram of (64) Before Completion is (43) Determination or Breakthrough. Hexagram (43) will always feel like closed doors and frustration unless we keep our mind open.

That is the lesson of (64) Before Completion too, because its message is that all things change. Remaining inflexible or operating with impatience and hard line assumptions would lead (64) Expecting Completion to feel more like the initiation/testing or challenge presented by (50) Cauldron.

Any disappointment or 'dark night of the soul' testing occurs because you failed to heed the warning of line 3.

The Most Comprehensive I Ching Reading

For deeper insight into the meaning of a changing line, all line interpretations include the resulting hexagram that would have been generated if that were the only line changing. For example (31) Wooing with line 2 changing would become (28) Critical Mass. Line 2 is a warning about the same excess that (28) Critical Mass describes so the message of (31) Wooing line 2 suggests Wooing requires a strong foundation.

The roof of your aspirations with a weak foundation and aggressive response won't work because (28) offers a message: too much. Add line 5 which would have changed to become (62) Small Exceeding and we are warned to honor the small and less significant aspects and not be too rigid. When both lines are changing (31) Wooing leads to (32) Duration because we establish a strong foundation (line 2) with flexibility, consistency and honor the small things (line 5).

Hexagram interpretations also include the Hu Gua or nuclear hexagram as a secondary influence and the Zong Gua or reversed hexagram which shows the opposite condition. The Hu Gua gives added insight into the meaning of a hexagram because it shows the base motivation that is trying to manifest within the core hexagram. For example, the Hu Gua of (6) Conflict shows (7) Family as both the dynamics that can create conflict and how establishing clarity in expectations (like the Family) can solve it.

The Zong Gua of (6) Conflict would be (36) Brightness Hiding which is the opposite of what should be done in this situation. In Brightness Hiding we would have assumed nothing needed rectification and merely held to our inner light.

Which Line Prevails in an I Ching Reading?

Often there can be conflicting information in the interpretations when multiple lines are changing. Some oracle readers view the progression from bottom to top and consider the topmost line as the prevailing line. Others observe Line 5 as the highest expression in activating the message of the hexagram. Line 6 can show how the hexagram's message gets exhausted or is overdone. When line 1 and 6 are the only changing lines, many feel that the Hexagram's message is especially auspicious in that a line by line examination will need to be explored to make its message more clear. In (31) Wooing line 1, we are not inspired enough to act and in line 6 any action is superficial. When both lines change it leads to (13) Fellowship which is a superficial connection without intimacy. We would need to explore each line of (31) Wooing if we want to understand the law of attraction, especially when the heart is involved. In (12) Standstill we get stuck. This is where the transforming lines mentioned above become important. Line 1 associates with (25) Innocence so we open our perspective. Line 6 associates with (45) Gathering Together or networking. If both lines change it leads to (17) Following. If we are stuck, an innocent outlook and networking incorporates the needs or vision of others in a way that others follow. (12) Standstill with only line 5 changing (hexagrams highest expression) leads to (35) Progress. In line 5 we see that the only obstacle is fear or clinging to the past. We recommend that you take all lines into consideration because intuitively you will be able to see beyond any conflicting line interpretations.

To get the most out of the I Ching oracle, approach it with an open mind and a respect for the process. The I Ching was originally composed by Taoist masters who's understanding of life matches to how modern physics describes it. Additionally, they were inspired by natural processes where only now we are recognizing how nature can be a teacher. Think of the answer as a koan or riddle - this is not an oracle with random messages to be rushed through. Contemplate the Hu Gua, Zong Gua, lines and changing hexagrams until you understand the message prior to asking more questions.

Embrace the power of the ancient I Ching oracle time-tested insight for 4,000 years. Toss the coins and let the I Ching guide you whenever you're not sure which way to go next. Keep a question or situation for the oracle to comment on in your mind, and click the button 6 times to throw virtual coins.

The hexagram and its changing lines are calculated automatically, and shown while you're doing the reading. After the coins for the final (6th) line, the relevant hexagram texts will be displayed.

You need to login and upgrade your account to a premium membership. 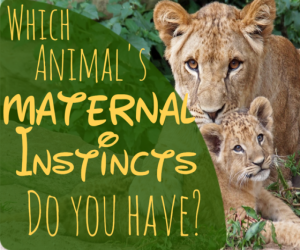 Which Animal's Maternal Instincts do you have?