Biorhythm is an hypothetical cycle that affects humans in some life aspects. Each aspect (physical, emotional, intellectual) has a different period (23, 28, 33 days respectively), and all periods begin when we are born, so of course the cycles will diverge.

As should be obvious, people should watch out for "negative" phases of each period, but the biorhythm "theory" stresses that crossing days (when a cycle transitions from negative to positive and vice-versa) are the most dangerous.

Even more stressful are double-crossing or triple-crossing days, that is, when two or three cycles transition in the same day. Some say that suicide rates correlate strongly with triple-points, as well as triple-bottom days (when all three cycles reach the bottom more or less simultaneously).

Finding the right person has for centuries encompassed poetic thought and romantic vision. But is it possible to determine how compatible two people are based on their dates of birth and the cyclical patterns of time? According to Biorhythms theory, it is possible to gauge how a couple may fare in a relationship based on three specific cycles.

Biorhythms and the 3 Cycles

Biorhythm theory is based on the concept that each of us goes through a process of three cycles. These cycles begin at the day of birth and oscillate throughout one’s life. The three cycles in question are the physical, mental and emotional and each cycle has a specific meaning as well as its own period. The three cycles’ meaning and time frame are as follows:

The idea of periodic cycles and their connection to human experience has always been around, for example in the idea of lucky days. William Fliess, who was a Berlin physician and patient of Sigmund Freud, was the first to device the cycle of 23 days and the cycle of 28 days in the late nineteenth century.

Fliess based his findings upon observing regularities at 23 and 28 day intervals in phenomenon, such as birth and death. He later labelled the 23 day cycle as ‘male’ and the 28 day cycle as female. This is probably how these cycles later got their names in biorhythm theory, the physical representing the male and the emotional the female.

The third cycle, consisting of 33 days was discovered by Alfred Teltscher, a professor of engineering at the University of Innsbruck, who observed that his students had good and bad days academically in a rhythmic pattern of 33 days. He concluded that the brain ability to absorb and process information ran in a cycle of 33 days, giving the cycle its ascribed meaning and name, the mental cycle.

Some calculators, including this one, add a apocryphal "Total" curve, which is simply an average of the canonical three curves. This helps to spot general highs and lows, as well as composite zero-crossings. 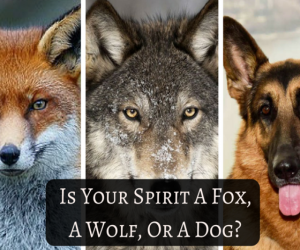 Is your Spirit a Fox, a Wolf or a Dog?